His immersive artworks are beckoning at first glance, inspired by the surroundings of the beautiful Bay of Plenty, in the northern islands of New Zealand. By trade, Young is a keen surfer and a boat builder by profession, both of which often appear as subjects within his artworks themselves. His body of works are largely influenced by the ocean and brings his passion for surfing and craftmanship in his evocative glass form.

A prevalent medium within his works are industrial elements used to compliment his organic glass; Concrete as a basic construction material is repurposed to form both a physical and visual contrast between the textures and colors already present in his forming artworks.

In his latest exhibition at REDSEA Gallery, Ben Young heightens his explorations of the materials used in his works to elevate and create works of true masterpieces.

The exhibition will feature his latest sculptures created especially for this exhibition at REDSEA. 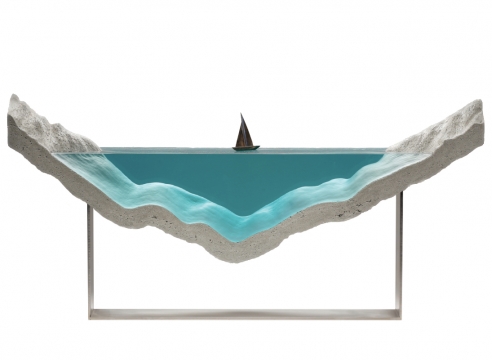