The recipient of numerous international photographic awards, including finalist in the coveted 2014 Lucie Awards, photographic artist Peter Steinhauer’s focus lies in documenting a city through the unique architecture of its’urban landscape. This exhibition presents new works from series based on both Singapore and Hong Kong, two cities American - born Steinhauer lived in during his 21 years of residing in Asia.

Singapore ‘Number Blocks’is a series that captures the unique number markings found on the sides of HDB buildings of Singapore. For Steinhauer the interest lies in the bright colour schemes and scripted fonts used on these otherwise normal government housing blocks. A distinctive, colourful design feature not seen in community housing blocks in any other city of the world. Meanwhile Steinhauer’s ‘Cocoons’ series documents the surprising beauty of a construction technique native to Hong Kong; the bamboo and fabric nets that encase the 'metamorphosis' of a building project.

Describing himself as a purist from a photography background not a digital artist, Steinhauer turns his striking images into large scale photographic works, self-printed using archival pigment inks and the highest grade Hahnemuhle paper. Previsualising the impact of the angle and perspective of his camera lense specifically for creating larger scale works, Steinhauer’s resulting images are turned into monumental works that capture the unique essence of the cities he moves through. “I’m not so much a social documentary photographer,” Steinhauer says. “I just take pictures of things because I think they look cool. What interested me about the Singapore Number Blocks is that someone took a lot of time to find color schemes and fonts — sometimes scripted or blockish or art deco fonts, some with drop shadow and lots of style — and I was intrigued that they put a lot of effort into all of that.” Steinhauer shoots in high resolution with a Phase One camera to capture every detail, and works mostly on cloudy days. “I prefer soft light,” he says. “It focuses more on the subject and I can push the contrast more without losing details. You can see what’s hanging on their doors even if it’s in the shadows, you can even see through people’s windows.”

Peter Steinhauer’s work is held in collections at the Carnegie Museum of Art, the Hong Kong Heritage Museum and numerous private and corporate collections worldwide. Born and raised in Boulder, Colorado, Steinhauer developed an early fascination and appreciation of culture which culminated in him living in numerous cities throughout the US, Stockholm, Sweden, Hanoi, Saigon, Vietnam and Singapore.

Peter Steinhauer’s ‘Singapore Number Blocks’ and Hong Kong ‘Cocoons’ series will be on show at REDSEA Gallery from 18th November through to 31st December, presenting 20 new images, 10 from each of Singapore and Hong Kong. 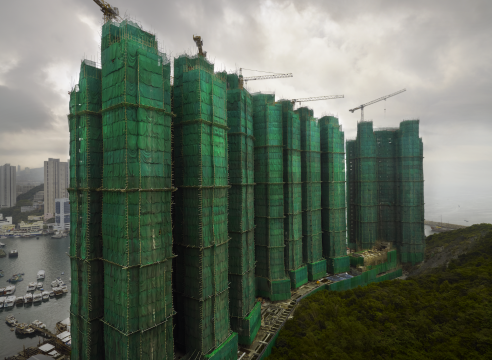